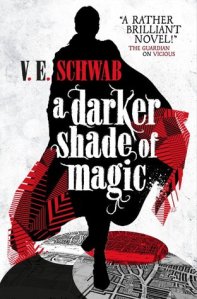 Title: A DARKER SHADE OF MAGIC

| A DARKER SHADE OF MAGIC on Goodreads |

Kell is one of the last Travelers—rare magicians who choose a parallel universe to visit.

Grey London is dirty, boring, lacks magic, ruled by mad King George. Red London is where life and magic are revered, and the Maresh Dynasty presides over a flourishing empire. White London is ruled by whoever has murdered their way to the throne. People fight to control magic, and the magic fights back, draining the city to its very bones. Once there was Black London – but no one speaks of that now.

Officially, Kell is the Red Traveler, personal ambassador and adopted Prince of Red London, carrying the monthly correspondences between royals of each London. Unofficially, Kell smuggles for those willing to pay for even a glimpse of a world they’ll never see. This dangerous hobby sets him up for accidental treason. Fleeing into Grey London, Kell runs afoul of Delilah Bard, a cut-purse with lofty aspirations. She robs him, saves him from a dangerous enemy, then forces him to another world for her ‘proper adventure’.

But perilous magic is afoot, and treachery lurks at every turn. To save all of the worlds, Kell and Lila will first need to stay alive — trickier than they hoped.

OKAY. So this one took me a liiiiiiitle while to wrap my head about, but by the end of the novel, it won me over completely. In the simple terms, I’d describe them as parallel worlds… kind of. There’s Grey London. White London. Red London. Black London. All woven beautifully together with V.E. Schwab’s excellently crafted worldbuilding. Seriously. This is worldbuilding at one of its best.

I’m not really that into historical novels, and I wouldn’t call A Darker Shade of Magic a historical novel by any means, but there were mentions — dialogue, dates, etc. — that gave the novel a distinctly historical edge. Which I LOVED. Because Old London? Magic? I want more.

Fierce. Badass. And generally just full of spirit. Case en pointe: “I’d rather die on an adventure than live standing still.” And if you don’t admire Lila Bard after that… then, well, I’m not sure what will.

The Dane twins. Kell. Lila. Holland. Rhy. Kings and queens and princes. I adored them all (well… not so much the Dane twins, but you get where I’m coming from) and their character development was subtle but rich, so engrossing, that I quite literally could not put the book down. And I’m SO curious to see where V.E. Schwab will go with her characters in the next book.

Can I please time travel to February 2016 for the next book? Pleeeeeease?

A coat with multiple sides? Oh my gosh YES.

I just KNEW I’d love the author’s writing style (having never read any of her previous books, neither YA nor Adult) from within the first few chapters, because by god, it was just beautiful. Descriptive, seamless, and just beautiful. If I wasn’t already interested in reading Schwab’s other book — then I certainly do now.

Blood was magic made manifest. There it thrived. And there it poisoned. Kell had seen what happened when power warred with the body, watched it darken in the veins of corrupted men, turning their blood from crimson to black. If red was the color of magic in balance—of harmony between power and humanity—then black was the color of magic without balance, without order, without restraint.

As an Antari, Kell was made of both, balance and chaos; the blood in his veins, like the Isle of Red London, ran a shimmering, healthy crimson, while his right eye was the color of spilled ink, a glistening black.

I could devour this writing for HOURS.

… And, consequently, will make you cheer on Kell and Lila. I *do* wish we’d been given some more of the Dane twins — I personally felt like I wanted to know more about them despite the fact that I thought their characterization was solid — but HEY, I haven’t seen anyone else with that particular complaint, so that’s more of a personal quirk there. 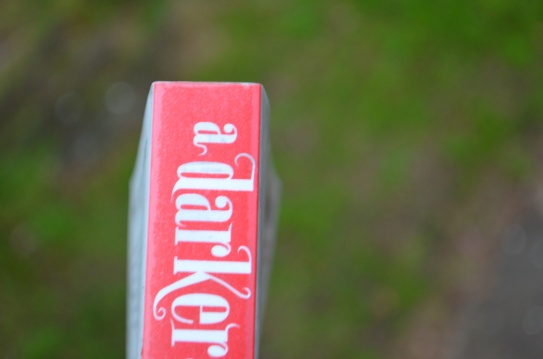 I have to say, I don’t think I’ve ever read anything like this. It was unique. Brave. Adventurous. It crept under my skin from the first page and didn’t let me go until long after the last.

One of my FAVOURITE aspects of A DARKER SHADE OF MAGIC (aside from, you know, kick-ass Lila, multiple worlds, and Kell’s coat) was Kell and Rhy’s relationship. I kinda wish he’d been in it more but the scenes between those two were pretty dang golden. What got me in the end was Kell’s unfaltering loyalty to him.

You know me. Cover snob. And seriously, the UK/AUS edition of the cover is JUST as gorgeous as the American edition. The black/white/red contrast is BEAUTIFUL.

TELL ME: have I convinced you to read A Darker Shade of Magic yet? Or, maybe, you’ve already read it. What did you think of it? Did you find yourself as engrossed in the world as I was? ALSO: UK/AUS or US edition — which do you prefer?

12 thoughts on “10 Reasons You Should Read A DARKER SHADE OF MAGIC by V.E. Schwab”